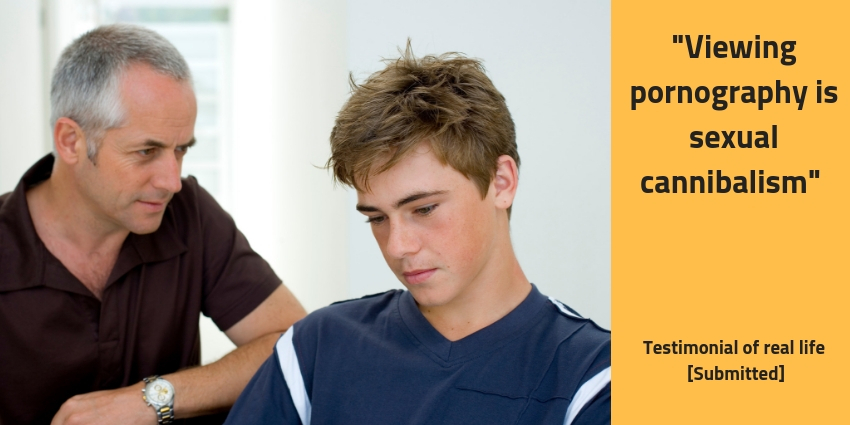 “Viewing pornography is sexual cannibalism: the one-sided consumption of a human being created in God’s image for personal pleasure.”

Thank you to the parent who sent us the following testimonial and allowed us to share it anonymously:

“It makes me upset when adults think we don’t need filtering (and when they get upset when asked about filtering before registering kids in school). About six years ago our worker borrowed my husband’s phone for a few minutes to call his Dad. Within those few minutes (walking to the office) he looked up a few gay porn sites. My husband had Covenant Eyes at the time and within two days I got a report. It took a bit to figure out what happened. And I could go on with stories. I think bad things need to happen before people realize. Many of the things I hear make me angry, and it is legitimate to be angry about the use of pornography – it’s much worse than just lust, it is sexual cannibalism, the one-sided consumption of a human being created in God’s image for personal pleasure—one must be very careful not to slip into the sin of pride. When dealing with issues of sexuality, we can never say, “Well, that’s not a sin I struggle with and thus I am somehow better than those who struggle with these sins.” After all, in John 7 we see how the Lord Jesus dealt with those guilty of sexual sin, after challenging those who sought to stone a woman taken “in the very act” of adultery: “He that is without sin among you, let him first cast a stone at her.” One by one, they left, “convicted by their own conscience.” Jesus then said to her, “Neither do I condemn thee: go, and sin no more.” Pride, we see in the New Testament and in the ministry of the Lord Jesus, was condemned far more harshly than sexual sin. We have to assist each other in becoming free from sexual sin, not set ourselves above other people.

My frustration is not simply the result of seeing just how widespread the use of pornography is, and how damaging it is. As I heard one speaker put it, those who do not think they are susceptible to sexual sin are saying they are stronger than Sampson, wiser than Solomon, and closer to God than David, the man after God’s own heart. What frustrates me is that time and time again, men I speak to refuse to do what it actually takes to kick porn addiction and purge their minds of this scourge. In all cases, pornography is by its very nature predatory, perverted, narcissistic, and in direct opposition to how God created sexuality. It is, simply, self-inflicted destruction that contributes to the external destruction of so many of the lives that make up those de-humanized pictures. In cases where the man (or, in far fewer cases, the woman) is married, it constitutes adultery. This is not just our culture, our church, our own “little lust problem” or “bad porn habit.” This is people consciously deciding to consume other people like a product, destroying their own relationships, twisting their perceptions of the opposite sex, and creating neural pathways in their brain that will often prove almost impossible to subvert.”