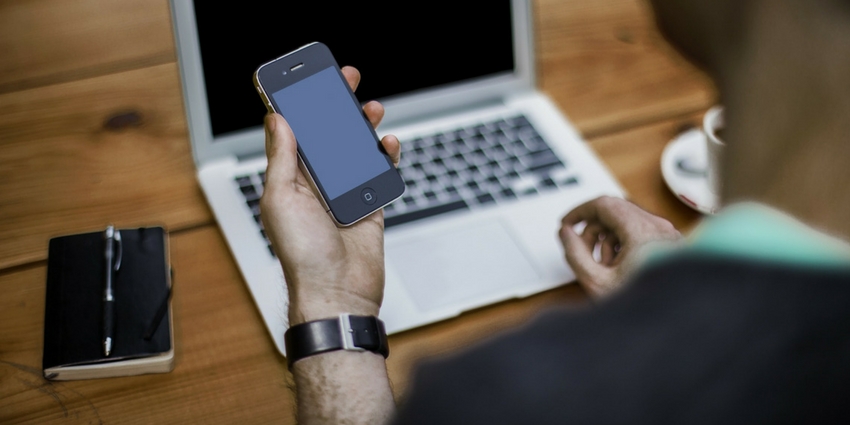 Living as a stranger here below, journeying to a city that has foundations – and then, at the same time, on YouTube and Snapchat… Can the two go together?

The greatest walking event in the Netherlands will commence in one and a half months, when 50,000 people will walk in and around Nijmegen for four days to receive the Four Day March Cross. The exertion and perseverance of these walkers can be used as an example for us when we contemplate the baggage of Christian Pilgrims and their media usage. These walkers don’t only make sure they have the right shoes and light clothing, but they also very carefully pack their backpacks. As they add every bottle of drink and every roll of energy candy, they ask themselves if they really need it. They will avoid all excess baggage, because they feel that every 100 grams they don’t need acts only as ballast. Similarly, the runners in Hebrews 12:1 are urged to lay aside every weight that can hinder them. During their journey, these walkers or pilgrims also manage their time carefully and avoid everything that can divert them from their destinations. A Greek myth relates that Princess Atlanta lost a race because her competitor rolled three golden apples over the racetrack. She couldn’t resist the temptation and picked up the apples, thereby losing the competition.

What is the practical meaning of this for a Christian in the 21st century? How can a father apply this image of the pilgrim to the upbringing of his teens? “Come on, Dad. You can’t walk with your head in the clouds the entire day, can you?” One of the malicious sides of today’s media is that they continuously demand our attention. This was already the case back in the days of the old-fashioned telephone, which penetrated into our conversations, disturbed the peace or interrupted our meals. Modern media devices don’t ring anymore, but the vibrating signal is quite sufficient to interrupt our concentration.

Why is this? In the past few years, we’ve come to know more about what takes place in the brain during the use of social media. Checking emails, messages, or WhatsApp becomes a habit or even an addiction, because of the regular interesting “rewards” perceived by getting these messages. These rewards cause the brain to produce dopamine, a “stimulating hormone”, which gives it a kick and stimulates the recipient to go on: to another film, another reply, reading another couple of messages. Another vibrating signal again: perhaps there is another interesting tidbit? It is precisely the unexpectedness and the pull of the unknown (just think of Snapchat) that make this effect so strong. Dopamine is a material in the brain that performs all sorts of functions, but one of its involvements is in addiction and the associated experience of pleasure. Brains can become so used to dopamine stimulants that we need more and more of them in order to feel “normal”.

In his book Ontketen je brein (Unleash your brain), Compernolle, a Flemish neuro-psychiatrist, describes how we become so accustomed to all these small, unpredictable rewards from our smartphones that we are no longer able to go offline. The deceitfulness of this is that we find it pleasurable. A second result is that these media continually disrupt us when we want to concentrate or rest or sleep. This disturbs important mental processes, such as reflection and archiving. Therefore, Compernolle advises us to go offline for an hour a couple of times per day, only do one task at a time and take regular breaks. This will improve our concentration, our willpower, our self-control and our creativity.

Christians must take this advice seriously. Young people – but also older ones – regularly complain that they have a hard time concentrating. Do we realize that the devices that constantly demand our attention are like heavy concrete bricks in the backpacks of pilgrims? That those hundreds of stimulations per day are the golden apples that roll over our racetracks? They look attractive and promising, but they exact a high price when they distract our attention during the sermon, during Bible reading or during our prayers. Here, only a radical choice is fitting, and parents have the important task of being the example: Go offline an hour before going to sleep, reserve time to “reflect” and time to think about and meditate on God’s Word. Do not read your Bible on an electronic device. Make sure that digital stimulants cannot disturb your Sabbath rest, by silencing your smartphone from Saturday evening to Monday morning. Avoid social networks that exist precisely because of surprise and stimulation (i.e., Snapchat) as much as possible. If your (home)work allows, turn off the sounds and signals of other networks (i.e., WhatsApp, Facebook, e-mail, etc.) to the extent possible and limit yourself to only answering these types of messages at fixed times. If someone really needs you, they’ll phone you.

Among the many forms of media distraction lies a second danger that the pilgrim should greatly fear. In Bunyan’s Pilgrim’s Progress, we see how Christian continually met with diversions. When he, together with Faithful, passed the town of Vanity and could not bypass the fair, they put their fingers in their ears and looked upwards. Further on, when Christian and Hopeful passed the Enchanted Grounds, where sleep would be deadly, they kept each other awake by means of spiritual discourse and singing. In a previous article in this series, we have seen the excellent possibilities that these new media can offer. The other side of the coin is the secular influence of the “image culture” on our families. Games, videos, and vlogs on YouTube and series via NOP and Netflix slay their thousands. It is very important for parents to watch what their children are doing online and to familiarize themselves with sites like Facebook, Instagram, After School, ASKfm, Kik, and LIVE.LY to name only a few.

It often appears that parents themselves aren’t really that convinced of the associated dangers and, for the most part, are only concerned about the use of obscene language. The American preacher John Piper has an entirely different opinion about this. The article he wrote in 1995 about TV is still completely applicable to the image entertainment of the current era. “Turn off the TV. It is unimportant. And it is a lethal spot for your relaxation. The penetrating banalities, the sexual suggestions, and the God-denying values do not uplift your soul. It is mind numbing. It drives God away. It quenches prayer. It darkens the Bible. It reduces the value of your soul. It corrupts virtually everything. It is unnecessary for most of you and is spiritually lethal for all of you.” Later, he wrote that, although we can be more selective on the internet, “yet you can also search worse things on it, while only the Judge of heaven and earth beholds you.”

Whoever takes these words to heart, will say, together with the poet of Psalm 119: “I have refrained my feet from every evil way” (verse 101). Then, we will be happy with filters and other aids that keep this form of “recreation” at a distance; for ourselves, as well as for our children.

But filters – they don’t work at all, do they? Indeed, if someone wants to circumvent digital protection, they will most likely find a loophole. But those who know the deceitfulness of their own hearts and are afraid of it, actually feel the need for protection. These fathers and mothers will tell their children that, in the first place, they need the filter for themselves. Then, like Christian and Christiana, they will urge all their children to depart from the City of Destruction and join them on their pilgrimage.

In relation to this, we can also draw a valuable lesson from the Four-Day Race: not everyone can join, just like that. Someone can join up with the procession of walkers, go through the same difficulties, walk the same distance, and come into the same city along the same Via Gladiola. However, only those who have officially registered and can show their identity card will receive the Four-Day Cross.

The same holds true for the Christian pilgrim. Media education begins with conversion. The English evangelist Arthur Pink points out that we may not be satisfied with raising children to be “rich young rulers”, as “it will not profit us when we each try to form a good character and do that which will gain God’s approval, if our sins stand between Him and our souls. What good are shoes to us if we are lame? Or what good are pairs of glasses if we are blind? The matter of the forgiveness of our sins is fundamental, of vital importance. (…) At the hour of death, it comes down to this: Have our sins been blotted out by the blood of Christ?”

The Other Pandemic has Exploded
April 17, 2020
Recent Posts
Archives
Newsletter
Go to Top